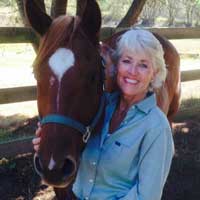 After nearly 4 decades in the saddle, Sandy Vreeburg's passion for riding is continually revitalized every time she has the opportunity to work with a new horse. Her goal is and has always been to ride with a great "feel" and a light touch, despite the challenges that come with learning the idiosyncrasies of each individual horse. Sandy started out by riding the "orphan "horse in the barn, as she didn't own her own horse until her late twenties. Rides were always unpredictable and often did not go as planned, but she gathered a great equine education along the way. Sandy began competing in her early thirties and became fascinated with "form to function" conformation. She studied bloodlines, conformation, and dispositions of proven producers and performers. Saving her money and her travel miles, Sandy set up trips with other interested buyers and their trainers and shopped in Texas, Nebraska and Oklahoma where the Quarter Horse prospects were plentiful. She loved selecting her gawky yet promising long yearling and bringing him or her home to begin a thorough training process to ultimately find the event for which the horse was best suited.

Sandy successfully competed in various disciplines with each of her horses in the AQHA shows. Once she reached the point where the horse was confident, balanced and ready to go, Sandy would find the right buyer, say a very difficult goodbye, and start the routine all over again. While it never got any easier to move on from a beloved four-legged friend - especially after his or her capabilities had been refined - Sandy continued to seek the challenge of developing new horses, as her love for the process is always greater than the end result.

After her two children reached their high school and college graduations, Sandy knew that she wanted to find a way to earn money by putting her unique equine skill set to use. She has always given her horse the care necessary to keep it at its best, which sometimes meant hiring specialists in equine chiropractic, acupressure or myofascial massage work. So, naturally, she thought, "why not pursue a career in one of these modalities?" Soon after considering this, Sandy saw an article on the Masterson Method in a well-known horse publication. She read the article and practiced the Bladder Meridian Technique the following day on her horse. After she had gone over her horse's body, Sandy waited patiently while she placed her fingers over the horse's Ting Points at the back of her left front hoof. Suddenly, the horse lowered her head, turned toward Sandy and licked her face as though she was her newborn foal. She was sold! This method has reopened Sandy's eyes to the extreme sensitivity and responsiveness of our equine partners.

Sandy's relationship with her own horse and how she approaches others has improved immensely since she began to practice this technique. While she has always thrived on being productive, The Masterson Method® has taught Sandy to slow down, be in the moment and truly wait to see what the horse has to say. The responses of the horses that Sandy has worked on, and that of their owners, have been delightfully overwhelming.

She is thrilled to be a proud member of the Masterson Method Certified Practitioners. Sandy currently lives in the Santa Cruz area and has four-legged clients in Santa Cruz, Watsonville, Portola Valley, and Woodside.