Masterson Certified Practitioner, Pat Turpening, was raised on a farm in Northwest Ohio and has loved animals all her life. Like so many young girls, Pat was intrigued with horses at an early age. After much begging, her parents finally purchased a pony for her. 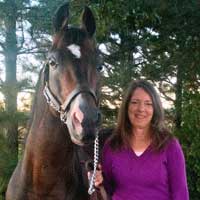 When the teen years came around, her interests moved on to other pursuits and horseback riding went on the back burner. However, it was only a matter of time before a little girl's dream became a life long passion.

Pat's young daughter started taking riding lessons at a local Morgan horse barn as a birthday present. Suddenly, Pat was back into horses again, only this time as a spectator. One thing led to another and her passion became a reality as she became the owner of a beautiful Morgan stallion. As time went on Pat's horse developed some performance issues. After a veterinarian's examination, it was determined that there was nothing physically wrong to explain his unbalanced trot. Thus began Pat's quest to see if she could find something that might help him.

While attending Equine Affair in Columbus, OH Pat watched an Integrated Equine Body Work demonstration by Jim Masterson. Fascinated by his work, Pat went home and tried it on her Morgan stallion. Amazingly, it worked and her horse showed visible improvement leading towards a balanced and vibrant trot. Encouraged to know more about this method, Pat signed up for the Weekend Seminar and ultimately the Certification program. Every step of the way she learned more techniques and continued practicing on her stallion and other horses. Significant improvements were becoming the norm. The Masterson Method; completely enhanced her stallion's performance and body movement. In turn, her horse's willing and relaxed attitude resulted in a higher level of workability.

Pat understands how to read horses' body language and help them using Body Work. The reaction of the horses and owners, when they see just what Body Work can do, has made this educational pursuit more than a passion for Pat. "Improve the horses' movement and impulsion and you will see a new horse and a very happy owner!"