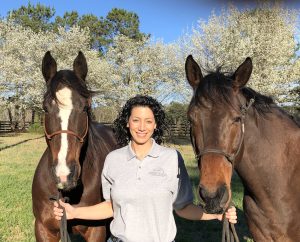 Michele grew up in New York and began riding at the age of 8 years old and adopted her first horse, an off track Thoroughbred at age 13. She rode competitively through Long Island, NY before she earned a spot on the equestrian team at the University of Connecticut.

She took a short time off from riding and owning horses as she went on to obtain her Masters Degree to become a Physician Assistant. She struggled with the desire to become a large animal vet throughout PA school but at that time, it was too late to change course. Her completion of PA school allowed her to enter back into the horse world and she rescued another off track Thoroughbred, Parker and relocated to Georgia.

Parker suffered with many ailments from thin soles to poor nutrition and overall lack of care after being retired from racing. As Parker began his rehabilitation and was brought slowly back into work he developed an SI joint issue that caused him to require time off from being ridden. It was at this point in time that Michele reached out to an equine chiropractor to help get Parker's body back in balance. Even after addressing proper balanced dental work and transitioning him to being barefoot after years of suffering with on/off lameness while shod, Parker still just seemed to hurt all over. Parker's chiropractor encouraged Michele to look into The Masterson Method® as a way to help release tension and support any adjustments she had made while Parker recovered. It was then that Michele realized that she could follow her dream of helping horses without needing to become a vet. The non-invasive and interactive process that The Masterson Method® embodied spoke volumes to her. In utilizing these methods she was able to see where Parker was hurting and where he needed strengthening. Just as obvious were the improvements in his self carriage and overall unrestricted movement after their sessions that confirmed for Michele that The Masterson Method® was the answer both Parker and she had been looking for.

Throughout repeated sessions she was able to appreciate the importance this bodywork had not just in his recovery but when he was back in work as well. The Masterson Method® was an important tool that helped Parker to use his body more efficiently and decrease risk of repeat injury. Through Parker, Michele saw that bodywork was not just for the sport horse or pleasure horse but also the horse in recovery or the horse in retirement; it was for all horses.

She currently enjoys riding with her husband and his warmblood mare as well and her two off track Thoroughbred's through their property or riding with friends out on trail. She has a passion for natural horsemanship and seeks to continue to become the kind of horse person who listens to the horse and communicates with them in a way they can understand in order to provide them with the ability to live a long, healthy life balanced in both mind and body.