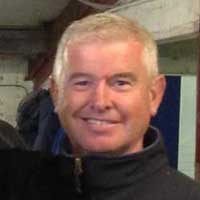 Richard Maxwell (known as Max) has been around horses since he was 8 years old. When he was old enough, he joined the army and became a military riding instructor in the Household Cavalry. Once he left the Household Cavalry, Max became involved with problem horses. It soon became apparent to Max that a horse that had been well behaved and then started to become difficult must have an underlying pain issue. He doesn't believe that horses have the makeup to wake up one day and be difficult.

This lead Max to meeting an amazing man in the UK called Andy Andrews who was a genius at treating horses with pain-related issues. Andy was different than most "back" people that Max had met. He worked with the horses from the poll to the shoulders, from the lumbar junction to the back, and from the front to the back, not the other way round, and actually, the "back" was rarely touched. Andy spent 5 years training Max before he sadly died.

Max carried on his mission to understand horses, why they become difficult, and why training becomes an issue for a horse that would actually have a trainable mind.

Whilst he was doing demonstrations at Your Horse Live expo, Max bumped into Leigh Jackson, an old friend and one that knew Andy. Leigh was so excited, she couldn't contain herself telling Max about this amazing man she had met, saying that Jim Masterson was the closest thing to Andy she had ever met and that he brought even more amazing things to the table. He was so intrigued he purchased the book and DVD, and then went to meet Jim. Max was blown away by what he saw.

So although he is now a newly accredited practitioner for The Masterson Method®, Max has been working with horses using similar techniques for nearly 20 years.

Max has some great clients that have been loyal for many years and they too are really reaping the rewards competitively with all the information that Max has learned from Jim and Vicky Devlin.