I saw Jim Masterson giving a demo at a Horse Expo in Sacramento. While watching the demo, I thought, “this is something I can do to keep my horses healthy!”  I was working full time as a Registered Nurse and up to my eyeballs finishing a Master Certification at the Academy of Intuition Medicine®, when I had an “aha moment!”  I knew immediately, this was a level of communication I was missing with my horses. I decided to investigate further by  purchasing the Beyond Horse Massage book and DVD. Then I signed up to attend the 2 day Weekend Seminar training and was put on the waiting list. Fortunately, there was a last-minute opening and I began my 3-year journey to become a MMCP.

I got my first pony when I was 10 and grew up in Pony Club and 4H.  As a teenager, I competed and coached vaulting. I have ridden most disciplines and competed in gymkhana and AA hunters. I play around with some cow work and trail obstacles too, for fun. I like cross training my horses to do a bit of everything because I think it keeps their minds fresh.

I am now a 4H Leader and Instructor teaching Horsemanship with the H Lane Vaqueros while managing a herd of sixteen horses and ponies for our program. We have a talented group of kids and our club won the National 4H Hippology title last year. Since many of our ponies are getting older and I wanted to be able to help keep them healthy and feeling good, I bought the Beyond Horse Massage book and video and started practicing on them. After attending the Weekend Seminar with Jim and Sandy Vreeburg, my confidence grew. I continued practicing and seeing results. The 4H members (8-18 years old) became curious at what was happening to their ponies. When I started doing the Fieldwork case studies on their ponies, they started noticing that their stubborn pony wasn’t as cranky. They were bucking less, were starting to enjoy jumping again and the pony that was hard to bridle was now starting to lower its head to willingly accept the bit.

The parents of the group asked me to put on a camp and as part of the horsemanship sessions, I taught Bladder Meridian and equine anatomy. I started teaching the 4H group the Bladder Meridian Technique on the first day. I taught them how they could recognize the blinks and releases. We practiced on their ponies midday and they noticed the ponies were looser and needed less leg to get into the trot. 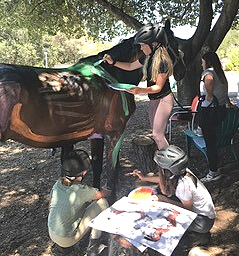 The next day, the group painted my Hanoverian, “River,” with tempera paint: bones on one side and the major muscles on the other. I had one of my teen leaders ride her and we all watched and commented on the movement. They saw how the bones and muscles looked in motion. They began to understand how restrictions can happen from an old injury. The girls were able to recognize how River throws her head as she picks up the canter.

I was able to use the Masterson Method® to help the kids understand why their pony was having a hard time picking up their leads or making hard turns off jumps, for example. They realized what we ask of their ponies is sometimes physically difficult for them. Most importantly, what they had perceived as naughtiness, was most likely related to pain and or restriction. When they did the Bladder Meridian on their own ponies, they were connecting the dots to the ponies’ reactions and what they had experienced in the riding lesson that morning. We talked about stiffness and warming the ponies up properly to help minimize pain and ultimately bad behavior.

Each day of the camp as we did longer Bladder Meridian sessions, I saw a shift in how the kids began to understand the Masterson Method® and how they started listening to their ponies. They were now creating a bond and partnership with their ponies. On the final day, of the five-day camp, we did a group session with all the ponies in the arena and invited their parents to watch. All the ponies were receiving Bladder Meridian while the sun was setting, it was a magical moment. The parents were in awe of the connections their kids had with their ponies and I found it incredibly rewarding. I can’t wait to do it again.

Find out more about these techniques and much more in our Beyond Horse Massage Book.

Start your journey to become a Masterson Method Certified Practitioner.