What your horse might have to say about lead change issues.

We’ve talked before about how discomfort, tension or restriction in the muscles of the horse can affect the horse’s movement, performance and even behavior. We’ve also discussed how horses are similar to humans in that each has a more predominant side, eye, or direction. This natural unevenness builds uneven tension in the horse’s muscles. The unevenness in the horse’s movement can be worked out in training if it’s done gradually and evenly. If done too aggressively, the movement may even out but the muscle tension that accumulates will still be uneven, and may contribute to a performance or even veterinary issue down the road.

Probably the most common way unevenness shows up in the horse’s movement is in lead changes. The horse can be helped to overcome this sign of natural one-sidedness by being exercised equally in both directions, gradually balancing the horse’s muscles and mental ability.  If the horse aggressively and consistently resists going in the difficult direction, if it gets worse before it gets better, or if the problem keeps popping up, then there may be another reason that’s making it difficult for your horse to do what’s being asked.

Your horse could be telling you that there is a primary issue – possibly in the feet and legs – that’s beginning to show up. Before a foot or leg issue gets bad enough to create a lameness, it can bother the horse enough that he compensates by staying on one lead rather than the other. It’s a first sign something could be going on. Forcing the horse to work on the uncomfortable side could lead to the issue becoming a lameness, or to the accumulation of excessive muscle tension in in the compensatory muscles, leading eventually to problems in other parts of the body.  If there is a primary issue, where might it be coming from, the front or the hind end of the horse?  Often, but not always, this can be felt by the rider, giving a first sign of where to start looking.

Front End
A couple of examples of primary issues in the front end are; pain from an abscess, inflammation of a ligament, tendon, or joint that has been building but has not yet created an observable lameness. In compensating for this, the horse develops tension in muscles that connect the affected foreleg to the neck, atlas and poll. Prolonged contraction of these will cause soreness and unilateral restrictions in the neck, atlas and poll.  When unilateral tension on the poll and atlas (the first vertebra of the neck behind the poll) causes torque on these joints it affects the function of not only the front end, but the hind end as well. For example, an atlas that is restricted by contraction on one side, can cause muscle spasms in the gluteal muscles at the hip joint on the diagonal hind leg. This is clearly demonstrated when the tension in the poll is cleared up, and the spasm at the hind end relaxes or even disappears.

When the horse compensates for foot or foreleg discomfort long enough, tightness also starts to show up where the neck and forelegs join the body, as the horse tries to get away from the discomfort in the affected leg with each step. This restriction will create further lead-change issues as the muscles that connect in the lower neck on one end and in the area of the pelvis at the other end (such as the longissimus dorsi muscles). This can make it even more uncomfortable for him to canter on one lead.

Hind End
Primary issues that affect the lead in the hind end often have to do with the hocks or stifles. Some of the muscles the horse uses to compensate 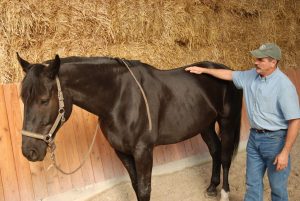 for discomfort in the hocks or stifles include the groin, hamstring, lumbar, and gluteal muscles. When these muscles put enough tension on the sacrum, especially unilaterally, it creates torque on the sacroiliac joint. In my experience, when the sacroiliac becomes “torqued,” it causes many of the muscles in the hind end that affect the lead change to tighten. When you release tension on the sacrum, you release tension in these muscles.

With bodywork, a lot of muscle tension that has accumulated in both the front and hind ends can be released, but unless the primary issue that’s causing it is dealt with then the muscle tension will return. This is where having a veterinarian take a close look at your horse might help you catch something before it becomes a lameness.  (Note: Excessive tension on the groin, hamstring, lumbar, and gluteal muscles can also originate from over-work or training, leading to the “mystery hind-end lameness” that doesn’t necessarily involve a primary issue or lameness in the feet or legs.)

So, after a lot of fancy bio-mechanics and latin words, the main point we’re trying to make here is that unevenness in your horse’s movement may simply be a result of the horse’s natural tendency but may also be a sign of something else going on. Paying attention to your horse’s behavior and performance might help both of you prevent something small from turning into something big down the road.

Learn more about The Masterson Method® by ordering a copy of the Beyond Horse Massage Book.

Get hands-on training at a Beyond Horse Massage Weekend Seminar near you.