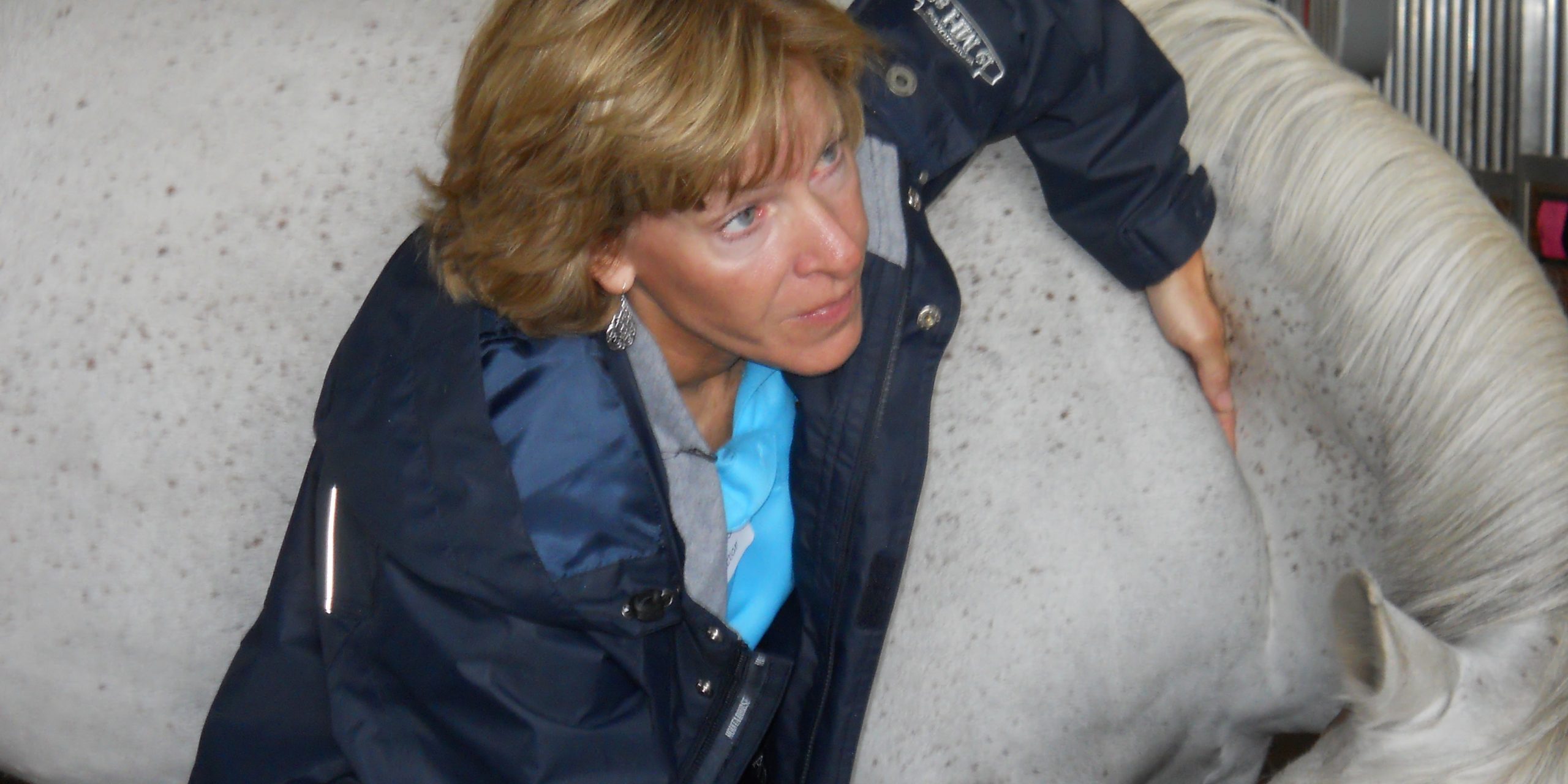 The most common complaint, in my experience, that inspires a horse owner to request bodywork concerns the perceived inability of their horse to bend properly.  As a rider and trainer, I know that a rider’s incorrect body position alone can make it impossible for a horse to bend properly through the body. However, when I have my bodyworker hat on, it’s my job to think about the horse and not drift into riding teaching. So I ask more questions because my definition of bend, which is evenly throughout the body, might not be what the rider is feeling and not liking.

Often the answer that comes back to the additional questioning indicates that the rider is really frustrated with a tight neck (usually to the right). That is not an unusual complaint since most horses load and therefore carry more tension on the left hind/right front diagonal.  For this rider, “bend” means being able to turn the head and neck to make a turn. By asking more questions I now know what I need to focus on to help this rider/horse combo be the best they can be.

In the case of more sophisticated riders who are working, for example, on ten-meter circles, they may be concerned about their horse’s inability to bend consistently with the arc of the circle in both directions. Usually, the horse bends easily on a circle to the right because that is the “hollow” side for most horses. However, often the horse “folds up” to the right and the haunches come in on the circle. The horse that bends easily to the right usually has difficulty stretching the right side of the body to come well around a bend to the left.

The smaller the circle, the more difficult it is and the more obvious the problem. Horses having trouble bending, for example, to the left will often have a “false” bend in front of the shoulder meaning they are actually traveling with a straight head and neck, bend right in front of the scapula, and a straight back and hindquarters. The back end often crabs sideways a little rather than traveling on the arc of the circle. One of the major goals of horse training is to straighten the horse, to get rid of the natural tendency of the horse to “banana” in one direction or the other (usually to the right).  But “a horse being straight” means the hind end directly follows the front end on a straight line as well as on a curved line. Consequently, an important goal of bodywork is to help a horse to be able to bend.

If additional questioning tells you that the rider is really concerned about rigidity in the neck and poll, then you know that you need to spend sufficient time with all the neck and poll techniques:  lateral cervical flexion, head up, head down, etc, paying attention to the knots in the groove behind the occiput and the knots along the topline of the neck and torquing of the atlas. Often there will be mid-neck knots from bracing that block the ability to bend the neck. SRSR (search-response-stay-release) alone can help those mid-neck knots that make lateral cervical flexion extra difficult, but there are other variations of techniques that help the mid-neck challenge as well.

If your customer is truly concerned about the ability of their horse to bend on a circle, it is important to understand all that goes into the horse’s ability to bend before you can approach the situation methodically as an MM bodyworker.  Bending is biomechanically complex and, depending on the size of the arc, can be quite demanding on the horse’s body. If the horse is supple enough and balanced, the bending is positive developmentally. If the horse is not supple enough, incorrect bending does not lead to correct body development and can be very uncomfortable and frustrating for the horse.

In a nutshell:  “Bend” should go through the entire horse’s body, not just the neck, from nose to tail. The horse’s body should arc along the arc of the circle with all four feet traveling the same arc (meaning the hind feet need to be able to travel within the lines made by the front feet). The issue is that the neck is highly flexible and the rest of the horse is not. As Masterson Method practitioners we have to maximize the ability of the spinal column to flex the tiny bit that is possible between the thoracic vertebrae and the lumbar vertebrae. Starting at the nose:  there should be slight flexion at the C1 area so the head can come around the circle. The neck needs to be able to curve smoothly as much as the arc of the circle. The shoulders need the freedom to actually pivot slightly on the circle with the outside shoulder stepping around farther than the inside shoulder. This rotation of the shoulders is critical to bend. If the withers are locked up, the bend will be blocked at the beginning of the back. If the C7-T1 junction is locked up, the shoulders are stuck and turning is difficult at best. The back needs to lift and bend laterally on the circle which means the rib cage swings to the outside of the circle and the space between the ribs on the inside of the ribcage narrows. There is a slight rotation of the thoracic vertebrae along with the lateral bend between the vertebrae. Due to the long lateral vertebral processes on the lumbar vertebrae, there is limited potential for pure lateral bend, but it is vital to have available the possible range of motion. Lateral flexion and Axial rotation along the thoracic and the lumbar spine is tiny vertebra to vertebra but it adds up to plenty of bend potential if suppleness exists all along the back. The inside hind leg needs to be able to step underneath his body (adduct) and the hindquarters must be able to rotate slightly around the arc of the circle just as the shoulders did. This comes from freedom of the pelvis to swivel (one side dropping as that leg is lifted and swung forward, then the other). A tail being carried to one side on a circle gives you a clue of what is going on with the horse because it can be caused by muscles that are too tight on the side the tail is being carried to.

Lucky for the horse, the Masterson Method toolbox is packed with techniques that can address all these components of the bend.  All techniques that address freedom of movement at the poll address the ability to flex correctly. Lateral cervical flexion helps the mid-neck. The C7 push, under-the-scapula release, the forward/backward/around the arc scapula releases, the withers release, the withers wiggle, the sternum lift and roll all effectively release the tension that stiffens the horse in the shoulders. The shoulder region techniques also release tension in the thoracic sling allowing lift. The release points of the hind end, the hind leg releases forward/back/around the arc, yoga positions, stifle in/stifle out, lateral rocking and diagonal rocking and the pelvic check are techniques that effectively recover range of motion of the hind legs, pelvis and back that the horse needs to bend.

Because the ability of a horse to bend through the body is so very fundamental to performance and the healthy use of his body, I personally have a little test that I do on every horse before I consider myself “done” with the bodywork session:  I lead the horse in a small circle around me in the stall and watch for the ability to flex on the circle at the poll, the ability of the neck to bend on the circle, but not doing “all the bending” for the horse, the slight shift of the shoulders around the circle, the narrowing of the space between the ribs on the inside of the bend as the ribcage swings out, a smooth curve in the thoracic spine, the inside hind leg stepping under the belly of the horse and the look in the hindquarters of coming around the bend. The horse has to be able to stretch (the meaning of course “release”) evenly around the outside of his body for this to happen. By performing this simple little test in both directions I can see where I need to spend a little more time freeing up a vital area on either the outside or the inside of the bend. The body must relax on the outside of the bend for the contraction on the inside of the bend to create bend in the horse’s body.

It’s a personal fascination of mine… thinking about the connection between horse biomechanics and how the MM techniques fit in that picture. I hope you enjoy thinking about it too.