The Bladder Meridian to the Rescue! 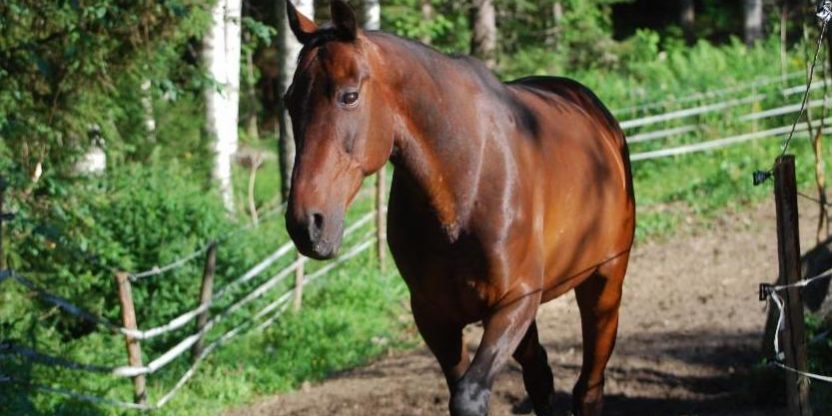 The following is a letter received from a woman named Kati Pukki, who had great success with the The Bladder Meridian Technique.

I found The Masterson Method last Autumn, and emailed you to thank you. I told you in my email about my now 27 year-old Standardbred gelding, who had issues when I did The Bladder Meridian Technique with him. He had had stomach issues previous winters, loosing weight, not eating, having gas, colics, he seemed depressed… and I feared that he won’t last this winter and considered putting him down.

The vet came to see him, found him otherwise healthy, lungs, heart and legs, and suspected gastric sand. She suggested psyllium treatment, light exercise and warm mash water to ensure he’s drinking enough. Her opinion was that let’s try this and if problems still appear, then we’ll let him go.

Okay, we did as doctor ordered. After a few days sand fix treatment (sand coming out where it should) I did Bladder Meridian technique with him, and this time he didn’t shy away on that difficult spot but followed my hand when I tried lifting it higher to ease the pressure because he was fidgeting quite a lot. It took ages. He was responding by fidgeting, blinking and his ears twitching back and forth, and then he started releasing like crazy. He sighed and yawned and did everything at the same time, almost violently, as if he couldn’t get it fast enough out of his system.

I was afraid that his nervous system was overloading but if I tried removing my hand, he followed it and continued releasing. I just stood there, stunned, arms aching, and stayed where he asked me to stay. Finally he lowered his head, sighed a long, deep sigh, stretched and stayed still, with soft eyes, looking very relaxed and one could say, happy. When I looked at the mirror afterwards, I looked very stressed, and one could say, very, very shaken. 😉

Since that day he hasn’t had issues with the Bladder Meridian technique. He has gained weight, been eating all his hay that he is given as much as is consumed. He has practically unlimited access to forage like it has been all his life since birth. He hadn’t had any excess intestinal gas, and no colics this far. No symptoms of depression of any kind. He has been his normal high-spirited himself during even this darkest period of the year as the leading stallion (in his own mind).

I think that the vet was right, he had gastric sand somewhere in his system. My guess is that sand caused him pain and accumulated tension, that he wasn’t capable to release and caused issues with the Bladder Meridian technique before. The Psyllium treatment was part of it, but he needed to release that long-term tension, and was ready to do it. In a very upsetting manner in my opinion, but this is about him, not me.

Jim, I need to thank you again.

I think your method had a significant role in his rehabilitation. I think it is important to notice, that because of the ulcer risk, he wasn’t given any painkillers at all during the process. After this huge Bladder Meridian release, there wasn’t, and has not been, the slightest symptom of pain left in that horse. I know him so well and I can tell when he is not feeling well just by looking at his eyes.

This is the horse of my life, and I am not going to keep him alive by any cost for my own sake. When it is time for him to go, it is time, no matter how much it hurts. But I am grateful that he is now able to live a good, healthy life at least a little longer. And I am grateful of this extra time we now have.

I thank you again, for behalf of my senior horse and myself. My warmest regards to everyone at The Masterson Method staff.

Discover subtle, gentle, simple bodywork that has the ability to profoundly affect the deepest interconnections of the horse’s body in our streaming video Light to the Core .