Scapula Release Down and Back 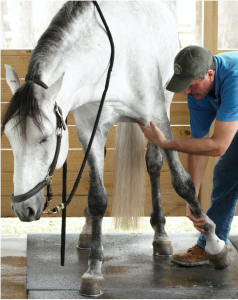 The goal of this technique is to release and drop the scapula down and back, and down and forward in a relaxed state, beyond the normal relaxed range of motion. This will result in a release of tension in the muscles that attach the forelimb to the body, deeper muscles of the junction of the neck and withers, and key muscles that affect both the poll/atlas and the hind end. There is an improvement in range of motion in the front limbs, elasticity and ‘shock absorption’ function in the legs and shoulders, release of tension in the hind end, and more coordinated movement between the fore and hind ends.

How releasing tension in this area affects the horse’s performance:

Range of motion of the forelimbs becomes restricted when muscles that are responsible for moving the front leg forward and backwards accumulate tension and are unable to release. Releasing this tension allows the horse to step out further, and leads to a more fluid and extended gait.

In addition when muscles that attach the forelimb to the body and support the front end structure become tense, then the horse loses its ability to absorb the impact of the foot hitting the ground and its ability to move with suspension. When this happens there is increased impact and load on the muscles, tendons, ligaments and joints of the feet, legs and shoulder. Thus, accumulation of tension in the neck-shoulder-withers junction can lead to issues in the feet and legs. Releasing tension in this junction helps not only to improve range of motion, but prevents stress to joints, muscles and ligaments of the forelimb.

Neck-Shoulder-Withers Junction and the Poll

We’ve already discussed the poll–front foot connection through the brachiocephalic and omotransverse muscles. When you release tension in the neck-shoulder-withers junction, you also release tension at the other end of these muscles, the poll and atlas.

Neck-Shoulder-Withers Junction and the Hind End

So you can see how releasing tension in this key junction affects how the horse’s entire body works and moves together.

STEP-BY-STEP INSTRUCTIONS FOR SCAPULA RELEASE DOWN AND BACK

a. Stand at the horse’s left shoulder, facing forward. (photo 1)

c. Rest the horse’s ankle in your right hand, and place your left hand on the horse’s knee.  (photo 3)

d. Allow the horse to relax the leg and shoulder as much as he is able.  (photo 4)

e. Slowly guide the leg down and back, straightening the leg and lowering the foot as you go. (don’t forget to lower the foot!) (photo 5)

f. Encourage the horse to rest in that position as long as he is able by keeping your hand on the leg or foot.  (photo 6)

It is important to do this Technique and most others on both sides. So after you feel that the horse has relaxed his leg down and back on one side, it is a good practice to follow up on the other side.

Learn all of The Masterson Method Techniques and much more in our Beyond Horse Massage Book.