Primary Issues of Tension in the Horse’s Body – Part One

Here are some examples of primary issues that create tension in the body:

In this three-part series of discovering Primary Issues in the Horses Body, we’ll list some performance or behavior issues and possible primary issues that might be behind them.  We’ll also talk about Masterson Method® techniques that may help with the (secondary or compensatory) tension caused by the primary issues. Most importantly, unless the primary cause is or has been dealt with, the tension will likely return. This list by no means covers everything that could be going on with your horse, but it may get you thinking about what’s behind the “why” when your horse is telling you something may be bothering him.

Often the horse resists the bit to avoid pain or discomfort in the upper neck, atlas, poll, or TMJ.  For example, the horse will pull against the bit to avoid pain in the poll and upper neck when asked to flex.  A primary issue in the front limb may not be bad enough to cause the horse to be lame but compensating for discomfort will, over time, create tension in the poll, under neck, and possibly in the TMJ.  This can cause the horse to resist the bit.

The horse will also resist the bit if the TMJ itself becomes sore due to dental issues.

When the horse resists the bit as he is asked to get “under himself”, it’s possible there is an issue behind and the horse avoids using his hind end.  This makes him want to stay on the forehand so he leans on the bit.

Holds Head Flat or “Corkscrews” When Asked to Bend, or Resists Bit or Has Difficulty Bending in One Direction – Possible Primary Issues 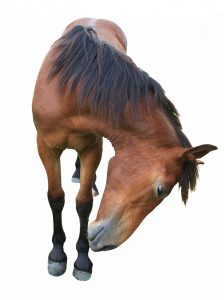 Excessive unilateral tension in muscles and ligaments in the poll and neck can lead to bending and unilateral resistance issues.  A muscle that is chronically contracted, such as the brachiocephalic which runs from the poll to the forearm and flexes the neck laterally, can cause crookedness in the neck.

As explained earlier, this contraction can come from front foot or leg pain or discomfort, usually on the same side in which the horse will not bend or the side he resists the bit.

In addition, horses are like humans in that they usually have a stronger and more predominant side. Thus, they can develop unilateral tension patterns over time that will manifest as performance issues like crookedness in the neck. Regular releasing of these tension patterns will help keep the horse even and balanced.  During the Lateral Cervical Flexion Technique, look for certain places where there is restriction of movement or less flexibility, especially the difference between one side or the other.  This is where you want to ask the horse to release tension. Remember to start releasing tension on the easier (opposite) side first and to work on both sides of the neck.

Front End Techniques to Address the Above Primary Issues

• Poll and Atlas Releases (Head Up and Head Down) 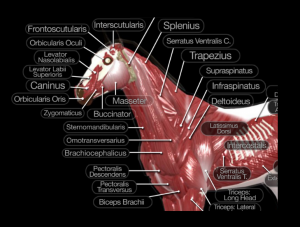 By focusing on the poll, atlas and the scapula at the C7-T1 Junction, you are working on the attachments from both ends of the two major muscles involved, brachiocephalicus and omotransversarius.  This makes it easier and more effective when you get to the area of restricted movement – the upper neck. Here you will focus on releasing tension with a very light touch. Lateral movement in the relaxed Head Up position will also help with this problem.

Note: Remember that any time you are having trouble working on an area or the horse is uncomfortable where you are working, go to the opposite side and release the tension there first.  The horse will have released much of the overall tension on the difficult side.  Don’t attack the problem area; go where it is easier first.

Tension in the poll and atlas is related to most performance issues. Releasing tension here makes the release of tension in other areas of the body easier, and last longer.

Coming up in Primary issues Part 2 the topic will be about Intermittent Front End Lameness, possible primary issues and which Masterson Method® Techniques help to release tension in this area.  In the final chapter of this series, Primary Issues Part 3, the focus will be about Head Shy Horses, what might cause this problem and again, Techniques to help the horse release tension.

Find out more about these techniques and much more in our Beyond Horse Massage Book.