Helping Jack be Nimble Once Again

My good friend has a quarter horse named Jack. I have known Jack since my friend bought him about 5 years ago and we ride together often. Jack is a big 16 hand goofy guy who tends to be a bit accident prone. I have been doing bodywork with this guy since my fieldwork studies and he is as sweet as they come and always a pleasure to work with.

One day recently, she was leading him from a grazing session to his stall, while I was riding up on my horse. She decided to saddle Jack up too and we would go for a ride.  She mentioned that Jack had apparently gotten tangled in his blanket overnight, as evidenced by torn and stretched belly straps. (I am guessing he had a pretty good struggle with that blanket).

He looked perfectly fine walking off, seemingly unscathed by the incident so she saddled him up in preparation to ride. But when she walked him out with the saddle on, he was immediately and profoundly lame in his hind end, both back legs, one seemingly worse than the other. After removing the saddle he was slightly better but still terribly uncomfortable and very lame.

She called the vet out the next morning and he was treated for an abscess, but he was equally lame on both hind legs and I really suspected severe muscle strain. He reacted strongly to anything beyond the lightest touch anywhere from lumbar to tail, gluteals and anywhere on his hind end. The vet agreed that we could give him Devils Claw for inflammation, so that was started. The poor guy was so very uncomfortable.

My friend is an ER nurse, and she wasn’t buying the abscess diagnosis either. She and I discussed helping him with bodywork and I said I would try to see what I could do. He was in such a state of discomfort that I knew only the lightest of touch would be the starting point. 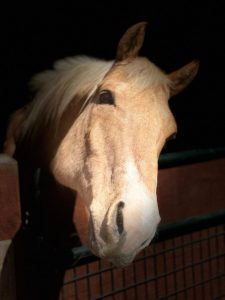 I did VERY light touch with him to start a little here and some there, and he responded really well. Then I added in accordion technique pretty much all over and he responded really well to that. His lameness became stiffness in a day’s time. It was remarkable how well he was able to release little bits with light touch and accordion techniques. I worked on his hind end quite a bit but also the rest of his body following my intuition. I would do more on the more effected side and by the next day, he was definitely more stiff on the side where I didn’t work as much. That really told me the work was hitting the mark.

By the fourth day, areas that were previously reactive, like on his sternum, he was now quiet when touched. I was able to really concentrate on his rib cage and back but also checked in with the neck, poll and TMJ areas. On the fifth day I got huge releases when applying light touch to his neck behind his poll and he yawned and yawned. This is a horse who typically head shakes, sneezes and licks and chews, but I have never seen him yawn while doing bodywork before. I took that as a sign that I might try to lift his legs to do some leg releases and that also went very well.

Jack did so well, I told his owner that he was ready for hand walks and my bodywork was done. I suggested hand walks because after a week off, Jack could be somewhat of an acrobat and an aerialist and I didn’t think that would be a good plan quite yet.

Three days after that, she came down with Jack to my part of the ranch and put him in the turnout. I went in there with him and she happily took photos of the play time (she is also an incredible and professional photographer). And what a playtime it was, Jack got BIG air! He was feeling really good and it made me so very happy to see him in total play mode!

I am so impressed with how using The Masterson Method®, I was able to help this golden boy improve and feel better during a scary situation. I am so grateful to Jim Masterson for sharing his life’s work with us and to Sandy Vreeburg for introducing it to me, mentoring me, and being my friend. She let me watch her work on horses for countless hours and I was always absolutely mesmerized. It gives me such great joy and fulfillment to be able to help horses heal and feel better.

Discover subtle, gentle, simple bodywork that has the ability to profoundly affect the deepest interconnections of the horse’s body in our streaming video Light to the Core and now being taught as a new Course.