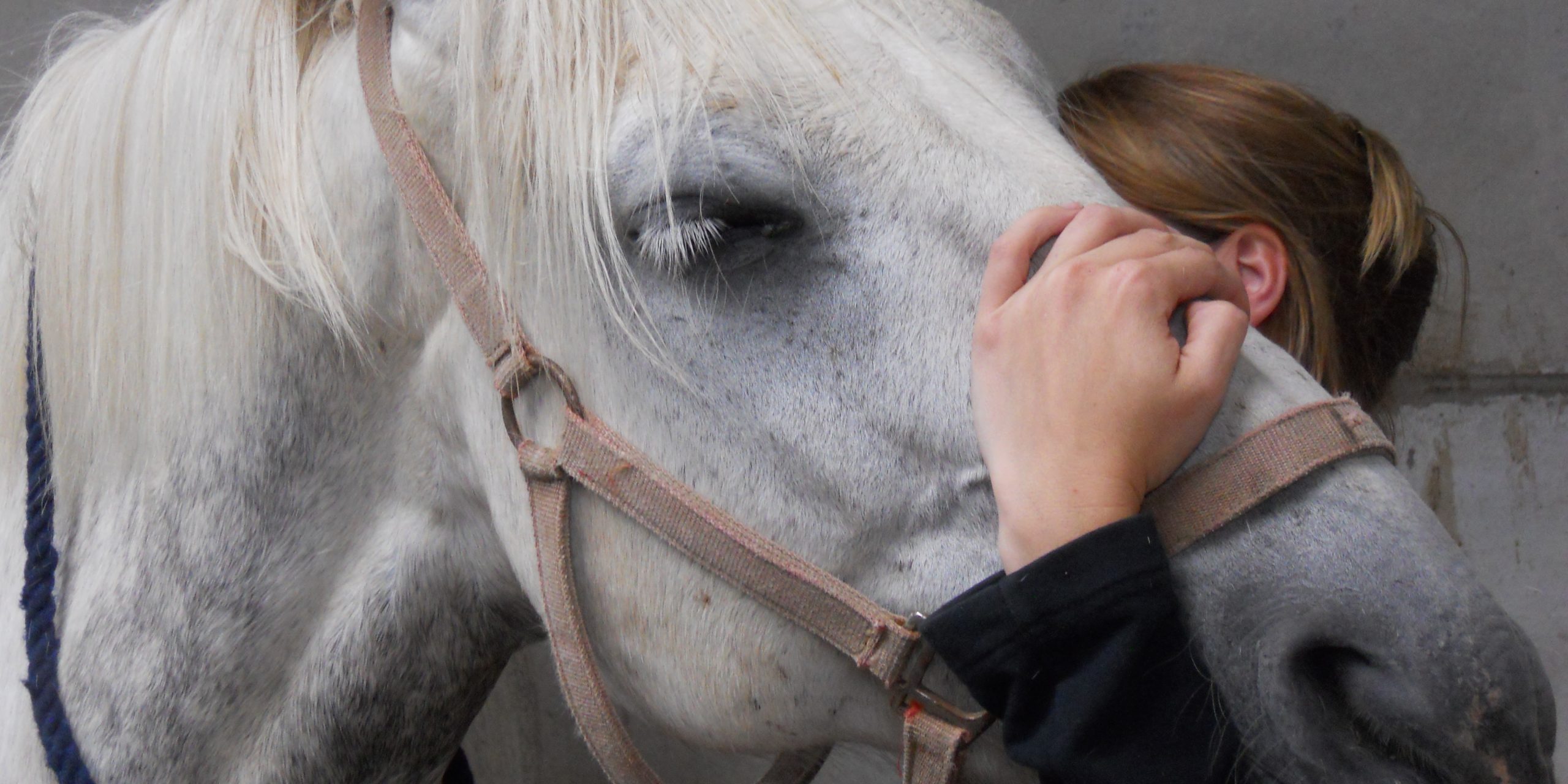 One of the things we never get tired of hearing about is the inspiring horse recovery stories, whose well-being has dramatically improved thanks to the work of our Masterson Method® Certified Practitioners around the globe, sometimes even after just one session.

The magic of this method is really not magic at all, although it can seem like it. With The Masterson Method®, you learn to recognize and use the responses of the horse to find and release tension in the horse’s body. In contrast to traditional equine massage, it works with the horse’s nervous system and the horse actively participates in the process. It is something you do with the horse, rather than to the horse.

This participation and interaction are what make the method fulfilling for those who use it and transformational for the horse. It improves their performance, movement, behavior, and relationship with the owner.

In order to hear the testimonials directly from the horse’s mouth, we asked our Masterson Method® Certified Practitioners what have been their most rewarding experiences and here are their responses for you to enjoy.

Horse recovery story from our MMCP Helen Jones, The Netherlands

The most special Masterson Method® moment I experienced was November 2020. I received an urgent phone call from an equine veterinarian and dentist with whom I have a great work relationship. She had treated the teeth of a retired sport horse that had never been properly maintained by its previous owners. She had worked as carefully as possible but still had to make quite an adjustment to get the teeth to close together again.

For a week, the horse was able to eat better than before, but suddenly he wouldn’t eat anymore, even when given pain medication. She thought that the horse might be suffering from severe muscle pain in its jaws because, after the treatment, he had suddenly started chewing very enthusiastically, but in a different way than he had done for a long time. She asked if I could help and, not knowing for sure if the problem was muscle-related or if I could indeed solve the problem, I explained that I might help by using the gentle Masterson Method® Techniques that aim to release tension in the TMJ area.

That same night, I met this beautiful, big, friendly guy and his owner. The dentist was also present. I started with palpation, according to the Masterson Method® Initial Evaluation, to find out where there might be soreness in his body. The poll, atlas, and TMJ were too sensitive to touch. Also, I noticed that the large masseter and temporalis muscles were tight and sensitive, as were the muscles running down the neck. His entire front end was sensitive and tense.

With this information at hand, I could make a plan to help him in the best possible way. He did not want me to touch his jaw, his head, or the back of his head, nor even when I approached him using a very light air gap pressure, several inches away from his skin. So I started to work using other techniques with which I could indirectly achieve relaxation in those sensitive areas. Sacrum Float, Withers Wiggles, Sternum Roll, Sternum Lift and Search, Response, Stay, Release along the neck, using air gap pressure or lighter, and he was ok with that. Pretty soon he started to release tension, licking, chewing, and yawning, discreetly at first, and then more and more extensively.

After I had been working with him softly for about half an hour, he also started to nibble his hay! And soon after that, he started to eat more comfortably and his chewing motion improved! What a magical moment! His owner, the dentist, and I looked at each other. I have to admit we were all a bit surprised, and could only watch with joy. 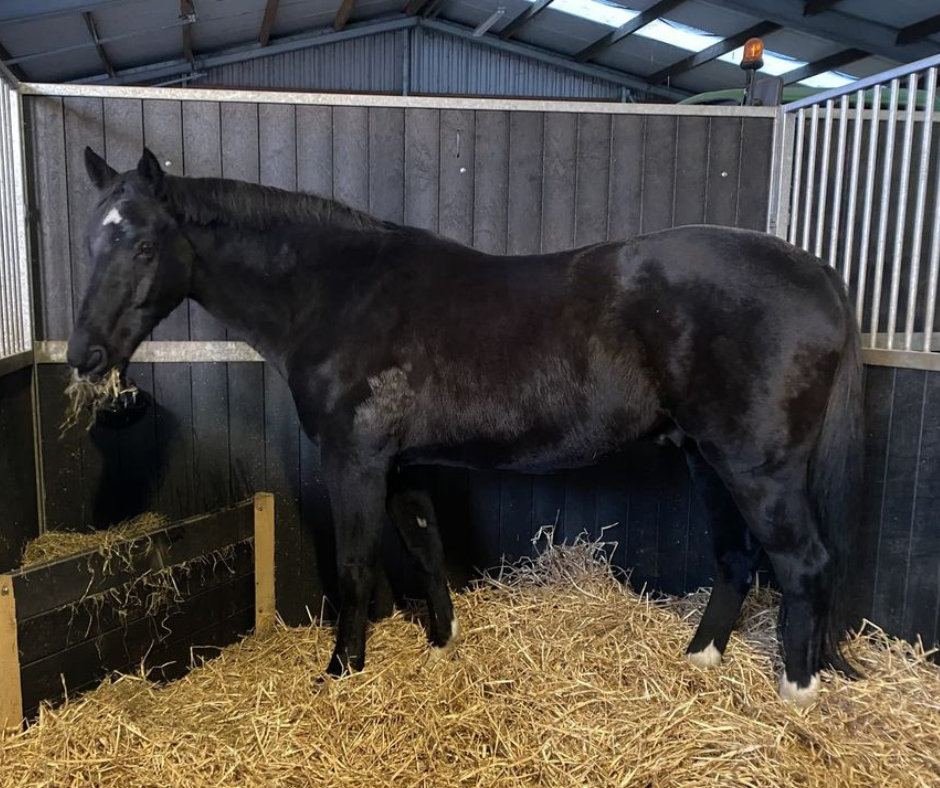 That is what I find so special about the Masterson Method®: you collect essential information with the Initial Evaluation, and then you start to search following the communication with the horse, without you going beyond their bracing point. That’s how the horse can release the sometimes extreme and deeply stored tension in its own time and way.

This experience also made me realize once again that a Masterson Method® treatment can be useful for many horses after a dental visit. During the treatment, the horse’s mouth is opened further and for a longer time than what the horse would naturally do, and this creates tension in the jaw and surrounding muscles. This tension can cause a blockage in the jaw area and subsequently in the rest of the body.

In addition to this tension creating possible problems, as the teeth are balanced again thanks to the dental treatment, the Masterson Method® techniques can help make it so much easier for the muscles surrounding the jaw and other parts of the body to adapt to the new dental adjustment.

I was contacted to work for the first time with this mare called Rain, who was suffering from sleep deprivation. Soon after that first session, I got the following feedback from her owner and it gave me goosebumps! I’m absolutely thrilled about the results of Rain’s session. Here is what her owner, Karen Poly reported after Rain received her first Masterson Method® treatment:

Some of you know the struggles I have gone through over the past year once we discovered that Rain suffers from sleep deprivation. Yes, horses do sleep standing up….partially.

The truth is that they have three stages of sleep, the last being REM sleep. For REM sleep they DO need to lay down. They may only need a total of an hour of REM sleep a day. They may not do it all at once. Rain does not lay down to sleep. She does not lie down. Period. She lays down to roll but she pops right back up. Imagine not sleeping for a year. This creates personality issues, body soreness, and anxiety issues, just to name a few. Trust me when I say I’ve tried all I can to unlock this mystery.

Last week I was introduced to the Masterson Method® of equine bodywork. I’ll be honest when I say I was very skeptical going in. But we were away from home, she was sore and she needed help. Back home, I enlisted the help of a Masterson Method® practitioner, Tiffany Downs and Rain had her first session yesterday.

Tiffany gave me some homework to do with Rain, and this morning I tried my hand at it. I wasn’t really confident that she was appreciating my attempts until the end of my efforts. She hung her head, pawed at the ground, and finally did this…. 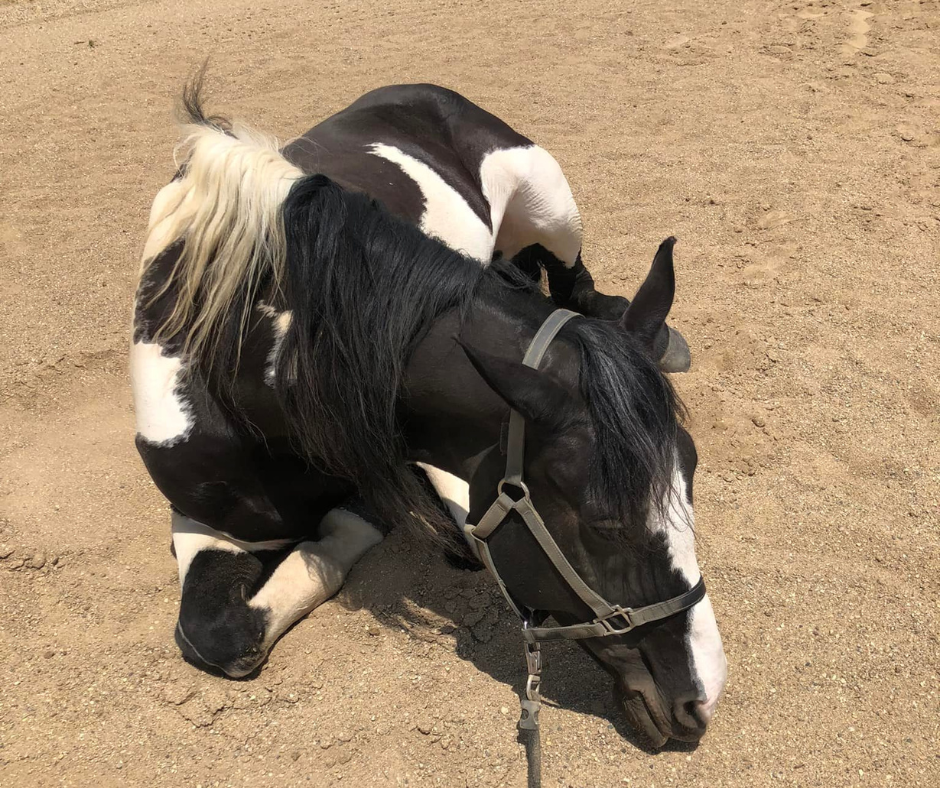 This is a great opportunity to note that, as certified practitioners, we can make a world of difference in one session, but a small, daily dose of The Masterson Method® Integrated Equine Performance Bodywork, frequently done by owners in between sessions, can help achieve even better results!

Horse recovery story from our MMCP, Coach and Instructor Lucie Klaasen, The Netherlands:

The most special Masterson Method session that I have experienced was about 5 years ago… I got a call asking if I wanted to treat a mare with the Masterson Method®. The mare, with her foal, had been in a horse clinic for more than a week. It had been a rough birth, but she had a healthy 3.5-month-old foal. However, the mare was losing weight and wasn’t eating well and the foal was demanding a lot from her. During the first week at the clinic, she was examined by 3 specialists and dentists, but they could not find the cause why she wasn’t eating well. 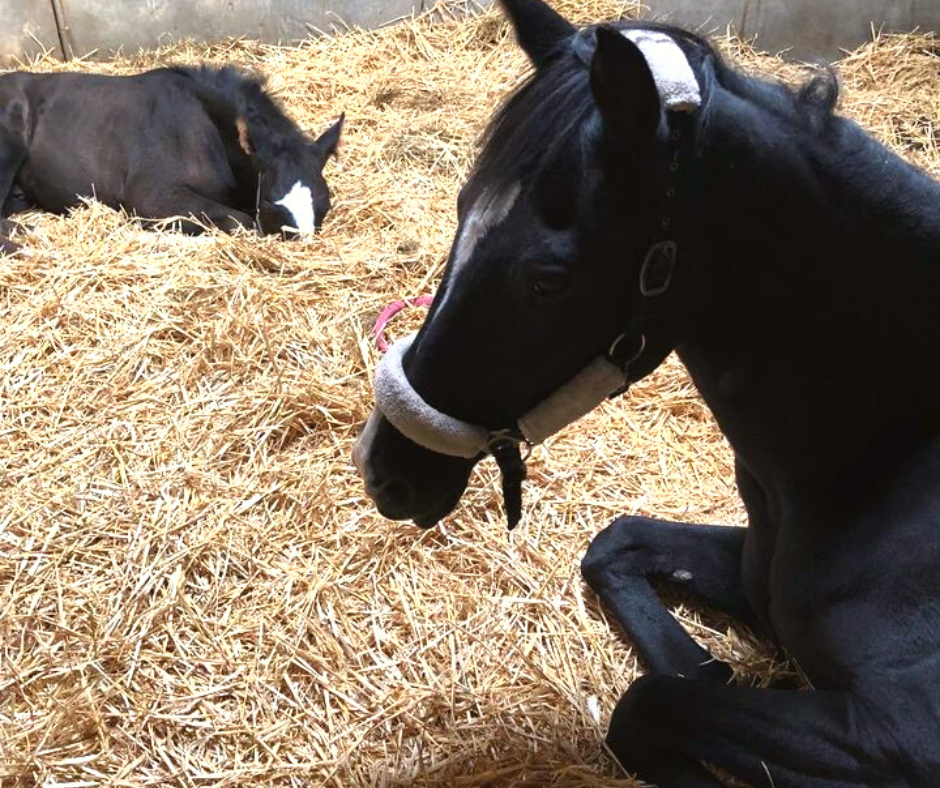 Initially, I was reluctant, what could I do if the vets couldn’t find anything after various investigations? But, who am I to doubt if the owner is so determined to try everything for her horse? And she had heard that the Masterson Method® might help her. So I asked the owner to get the vet’s permission first before I treated the mare. The vet appreciated this gesture and confirmed that he was ok with it.

This mare showed a lot of tension in the poll, TMJ, and jaw. She wouldn’t let me get near her mouth, so the tongue release technique was not an option, something which I came to understand after various dental research. Thus, I decided to start with the bladder meridian. The foal kept dropping in for a drink and I had to make sure I was very ‘present’ so as not to get distracted. I began to consciously breathe deeper, clear my head, and feel my feet. I wanted to invite her to release tension by being as relaxed as possible myself.

After the first 30 minutes, the foal lay down, and then, another half an hour later, the mare literally landed in the straw under my hands. I sat with her for a while and was deeply moved by her total confidence in me. 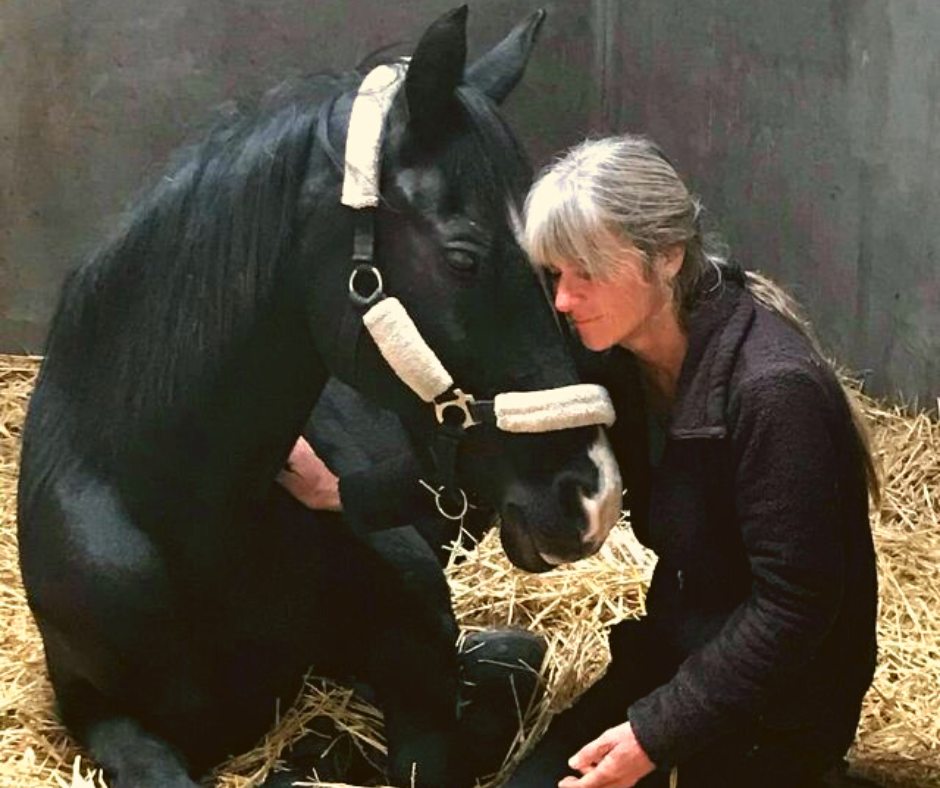 That’s the power of the Masterson Method®. The gentle touch sent a sign to her brain that this was a safe place, and that finally gave her the opportunity to relax. Remember, that when doing Masterson Method® you are not only working with the ‘physical’ horse but also, especially with their nervous system. By creating relaxation and safety, the parasympathetic nervous system, which is responsible for repairing, healing, and activating the digestive system, is activated.

The owner took the mare and foal home, where I treated her for a second time sometime after. Then I got a message from her telling me that her mare was now eating easily and without a problem anymore.

If you feel inspired by these amazing stories and would like to learn more about The Masterson Method® at one of our hands-on courses with an instructor, check out our Beyond Horse Massage Weekend Seminars that you will find in the following link:

And if you want to get a glimpse at all of The Masterson Method® Courses we offer, you can visit our Courses section here: https://mastersonmethod.com/courses-certification/