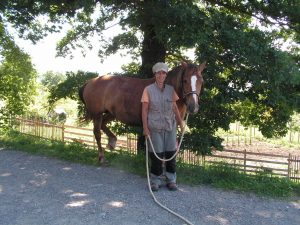 Tine was born in the Netherlands, where she obtained her certification as a physiotherapist. However, she felt that there was more to ‘taking care’ of people, so she went on to complete a three-year course in naturopathy with a specialization in acupuncture and phytotherapy (the use of medical herbs). At the same time, she studied shiatsu and raja yoga, She then moved to France, where she worked in a local hospital for 25 years as a physiotherapist. She took her first riding lesson at the age of 40 (she had wanted to ride since she was a child, but her parents thought it was ‘too dangerous’.) When she was 45, she bought her mare, Mia, who has helped her learn a lot both about horses and about herself. In trying to find the best way to do that, she discovered The Masterson Method® and intuitively knew that it was what she had been looking for. She would very much like to get The Masterson Method® more known and widespread in France to help people help themselves and their horses. Over time she has found that the ‘simpler’ things have more ‘power’ and that in humans as well as horses the ‘body doesn’t lie’. Tine uses her deep knowledge of physiotherapist with a more holistic point of view in combination with The Masterson Method® to work with horses and donkeys as well as riders/owners in the greater Geneva area.