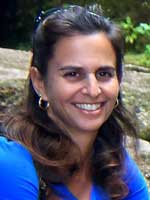 Growing up outside of Boston, Massachusetts, Shona spent most of her time with four legged playmates rather than two legged ones. A love of all types of animals combined with decades saving, training, and rehabilitating domestic and wild animals alike has led her on a path to work with horses also.

As a young adult she moved to Hawaii almost 30 years ago to work as a jeweler and has raised her family on the island of Kauai. Along the way she became involved with horses. Her daughter began taking riding lessons as a youngster and Shona became infected with the equine bug. She has spends her time with horses developing a mutually respectful relationship using Natural Horsemanship methods of communication in conjunction with training.

In 2014 her youngest horse, a four year old gelding, sustained an injury while out in pasture that no one could seem to find a solid diagnosis to help resolve this physical impairment. This “mystery lameness” led her to exploring and learning The Masterson Method. Masterson Method has helped her own personal horses and she now loves to share the incredible benefits of these techniques with horse owners and their horses in Hawaii.

Attaining her certification as a Masterson Method Practitioner has been a dream come true. It has further allowed her to embrace her passion for healing in use with horses. Using Masterson Method bodywork to help all types of horses that are participants in all types of disciplines including roping, western pleasure, and dressage is a calling that has been fulfilled.

She loves the connection that Masterson Method builds between the horse and the practitioner – along with the endless benefits of relaxation and freedom from restriction in the equine body.

Shona has completed all her Vluggen Institute modules and hopes to pass exams this March (2019) and obtain her EDO status.