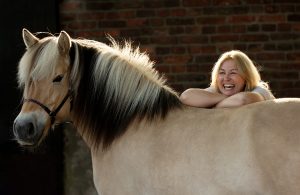 I sat on a horse for the first time at the age of 5 and all was right with the world for me. The older I got, the clearer it became that I wanted to spend my whole life with these wonderful creatures, until I had to redeem my horse in 2009 and a world came crashing down for me. I gave up riding and stayed away from horses as much as I could.

My daughter, who was 6 years old at the time, wanted to continue riding and so we rattled off many riding schools until we found the perfect one for us in 2012, where we felt comfortable. I still avoided close contact with horses so as not to build up a bond. In May 2017, I took a temporary job at the riding school and a few months later, a little thing in my life changed ….

At the end of 2017, a Norwegian mare named Hildegard came to the riding school from an animal welfare case, among others. She was a strong head shaker, very jumpy and insecure. After a few weeks Hilde “chased” me every time I was working in the paddock. I tried to ignore her, but at some point, I was no longer able to. So, I asked the owner of the riding school if I could clean Hilde. Well, the grooming soon turned into ground work, walks etc. So, the little princess crept more and more into my heart and the trust grew so much that I sat down in Hilde’s saddle after 9 years. I wanted to give her something in return, help her to minimize the headshaking and take away her insecurity, but I didn’t know how…

… and then came The Masterson Method®

In spring 2019, an information weekend about the profession of hoof orthopedics was offered at our farm, followed by a demo of The Masterson Method®.  I signed up because I was interested in the topic of hoof orthopedics, but also because the short description of The Masterson Method® made me very curious and I hoped to find something I could help Hilde with. So, I got to know a small part of the Masterson Method® and was immediately fascinated when Hilde stood still for the first time at the beginning of the demo, totally relaxed and how she reacted to the smallest and lightest touches. After only a few minutes, I knew for sure:  I have to do this training! I had no idea at the time how much more there was to this method; that what I saw was only a tiny part and what a fantastic, exciting time would still lie ahead of me. So, I signed up for the weekend seminar in October 2019. To pass the time until then, I devoured the book and the DVD as well as all the YouTube videos and tried everything out on Hilde. The headshaking became much less and she gradually became much calmer in temperament. After the Advance course in July 2020, I started my Masterson Method Certified Practitioner (MMCP)® training, which I successfully completed in May 2021.

The Masterson Method® has changed my life in an indescribably beautiful way. I am overwhelmed every time how much the horses “let themselves go” during the treatment and trust the human. Thank you, Jim, for discovering this fantastic method!