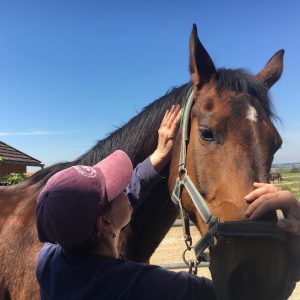 Sandra has loved horses since she was a child, but she didn’t own her own horse until well into adulthood. The first half of her life she spent getting a masters degree in French with a minor in Medieval Studies, after which she taught French in the U.S., taught English in France, and taught English and French in Germany. Horses entered the picture around 1997 however, and they have been the center of her life ever since.

In 2005 she became a licensed Feldenkrais Practitioner with the intention of working specifically with riders and horses. But although she was able to help riders, she never felt she was truly able to adapt the method to the needs of the horse. When she discovered the Masterson Method®, it was as if the last piece of the puzzle finally fell into place. Now she saw a way to bring the horse’s attention to areas of stress in the body so the nervous system could release it in much the same way the Feldenkrais Method did for humans. It was exactly what she had been searching for!

Sandra also has training in holistic healing and does energy healing with both humans and equines. She particularly enjoys working with young horses, doing groundwork with them and getting them ready for their first ride. She currently owns 2 horses which she rides in the California vaquero tradition.