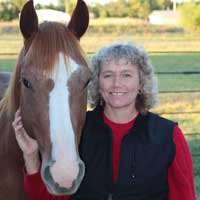 Ronda had horses for pleasure and companionship while growing up. Like many people, horses became a love put to the side in exchange for school, work, marriage and family. As her children got older she decided to introduce them to her lost love horses. Stumbling on a retired ranch/sale barn horse, Ronda soon realized the horse was trained better than she was, at that point she started her journey to become a better horsewoman. The Natural horse movement was just getting started and Ronda began to immerse herself in learning all she could from various clinicians and resources. Over the past eight years she has used these Natural techniques starting colts and restarting horses with problems.

Ronda along with her husband and children own a small cow/calf operation. A farming accident left her with a broken foot and the realization that she is not invincible. That was something that she had never faced before nor had it crossed her mind all the times she took those first rides on a young colt. This began the thought that there had to be something for her to do with horses that was less risky and yet would benefit the horse. Stumbling across the Masterson Method® web site Ronda felt that the whole concept it’s built around complimented her style of starting horses. Less is more, getting under the bracing radar of the horse, just made sense. From the first weekend clinic she was hooked and the journey began.

Ronda holds a firm belief in using a common sense approach to everything she does. The Masterson Method® of Integrated Equine Performance Bodywork just makes common sense. Working with the horse instead of just working on the horse, learning to recognize the horses responses to your touch in order to release tension in key junctions of their bodies, all sounds simple and to some degree it is but feel and timing also plays a role. Ronda’s ability to be confident yet relaxed around horses and her desire to understand the language horses use has helped make her colt starting and Bodywork a success.