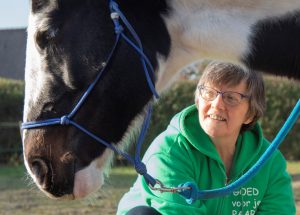 As a child i wanted to be a millionaire, an astronaut or doing something with animals. Sometimes I had a dream that I was riding a horse from school to my house. But that was unthinkable: horses were unreachable: we didn’t have the money, we didn’t know anyone with horses and my mother was afraid of horses. So I fulfilled the dream of my parents to study well, becoming a manager and earning a good lot of money. I lived my life – thinking I was a happy person because I had a good job and health. Until 7 years ago: I lost my job in a large reorganization and didn’t find another well paid job.

With all the free time I had, I started to study horse nutrition (because every rider should know what to feed his horses), horse massage and shiatsu for horses. With still no job, my husband supported me to start my own little company in helping horses. I could do a lot for them with the things I knew but there were also a lot of ‘simple’ problems I couldn’t help them with. There was a little pony with health issues because she couldn’t eat very good. The dentist came every 6 months but ‘there was nothing else’ to do for her. I found a video on the internet of Jim Masterson on the TMJ release. I tried it and she could eat a lot more than before. Her health was approving through this simple exercise. I went to Equitana in Germany to see a demonstration of Jim. It touched me deeply because not only of what I learned but also the connection he had with the horse during the demonstration. Afterwards I spoke to Vicky Devlin about the pony and she showed me another exercise I could do on the pony and gave me the advice: never give up.

And so, I started my Masterson journey, with a weekend in the Netherlands with Chaja Voest-Kolthoff, five days in Oxfordshire with Jim himself and Vicky Devlin, a lot of horses and coaches in the fieldwork and finally – after four times changing of the final dates through the virus – I could do my certification days with Walter Saxe in Germany.

I like The Masterson Method® because I like to work softly with horses and still have huge improvements. For me it is giving Passion and Performance back to horses.