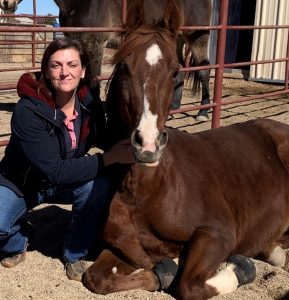 Nicole’s love for horses started at a very young age! Her father had trained OTTB’s for polo, and her mother was from a ranching family in New Mexico.  Though part of a military family who couldn’t own horses, Nicole could always be found snuggling the nearest horse neck she could find!  She grew up riding recreationally and then, after marrying a military man, they both found ways to spend time with horses wherever they went. In the UK, she volunteered at a barn; and in Okinawa, her daughter took lessons at the only barn (at that time) on an island while Nicole would groom, clean, and play barn hand anytime she could.

Then when they returned to the USA, her heart horse found her! It didn’t take long to figure out that this rescued Hanoverian would change her life!  Soon after leasing him from the owner of the barn where their daughter took lessons, her husband, Dan, bought Burlap for Nicole. After many vets, chiropractors, reiki practitioners, farriers, etc. basically told her he might be able to do minor things but she should consider him for pasture retirement, she decided that wasn’t good enough. As Nicole investigated therapies online, along with her network of friends and family in the horse business, to find the right “stuff” for her heart-horse, she ran across Jim Masterson.  After watching a few videos and seeing a practitioner work on a horse, she added it to Burlap’s regime. Within a year, he was able to jump again and perform lateral movements in dressage.  Though this boy had a rough past, was conformationally “challenged,” and would shut down for most folks, he and Nicole had learned a new way to communicate and move. This started Nicole on her Masterson Method® journey!

Practicing a lot on Burlap, she was learning quickly. After a few years of inopportune timing and then…yup…COVID-19, she finally got her certification! Through extra time with the books, case study horses, and amazing mentors and coaches, Nicole feels that the extra time only deepened her love for The Masterson Method®, and she has joined Jim in his goal for all horses to experience the bladder meridian at least once!

She also continued her education by pursuing the Equine Specialist certification.  Working on therapy horses (specifically with Veterans) has been a dream since her first interaction with a therapy barn for her daughter, and Nicole is striving to make that dream come true as she continues to refine her Masterson Method® skills. Working with therapy horses as a facilitator has been truly rewarding while she is able to see the bond between horse and human grow while giving the gift of bodywork to both horse and student!

As a military wife, Nicole has had the privilege of working in several states already. She routinely goes to Texas, New Mexico, Florida, Colorado and now lives in North Carolina.