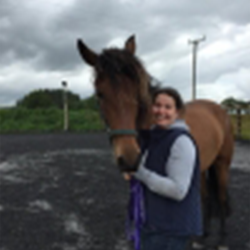 Born in Austria where her love of horses started in the local riding school, where hard work was exchanged for rides. Her mother’s stipulation for her being allowed to learn to ride was that she learned the book “My First 1000 English Words” – which she did over the summer holidays when she was 9. Those English words obviously came in useful when she moved to Scotland in her 20’s. Mitra rides for pleasure but particularly enjoys the training aspect of dressage and simply being with horses.

Introduced to The Masterson Method® by a friend on a one day seminar she was fascinated how subtly horses communicated – and how they transformed once they realized that the human was actually listening. She then signed up for the weekend seminar – and from then decided to qualify, which she did in June 2015. She loves the journey The Masterson Method® has taken her on so far, the horses she has had the pleasure to work on and help and the great people she has met.

She now lives in Graz (Austria) and covers Styria