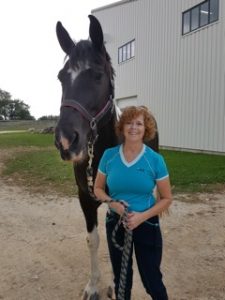 Melody was raised in the Midwest and got her first pony at the age of 6. Her mom surprised her with her first horse, an Appaloosa named Eagle for her 14th birthday. A year later she wanted a companion for Eagle and purchased a Tennessee Walker named King. After high school and college, she made the tough decision to sell her horses and join the Army. She was away from horses for many years with just an occasional ride from time to time but her passion for horses was never lost. She had a exciting adventure back in 1995 when she was in Egypt for an military exercise and got the chance to go horseback riding around the pyramids on a beautiful horse with “no name”. Finally, after raising her family she knew it was time to get involved with horses again and in 2006 she began volunteering at a equine assisted therapy barn and fell in love at the first smell of horses. That time also sparked the pursuit on how she could help horses feel better and began researching different modalities and began studying TTOUCH. In 2008, she got a 3 year old Andalusian/Thoroughbred named Calypso. Her dream had come true but after only 5 short years together, she lost Calypso to an unexpected accident in the pasture. Determined not to give up on having a horse in her life, she purchased a Percheron/Spotted Saddle named Hanna. In 2013, she came across the Masterson Method and was completely hooked! In 2014, she took the online Masterson Method course and knew she had to commit herself to this practice. She has since retired from Army with 35 years of service and now spending all her time with these amazing creatures called horses doing bodywork. She continues studying different modalities of equine bodywork such as TTOUCH, BREMM, Sport Massage, Myofascial Release and Red Light Therapy, but the Masterson Method will always be her number one and she became a Masterson Method Certified Practitioner in 2016 and the rest they say is “history”!