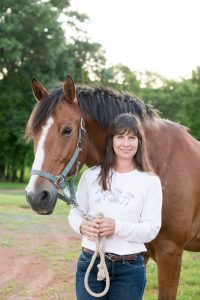 In addition to being a Masterson Method Certified Practitioner, Mary Kay is also a Masterson Method Equine Specialist. A familiar theme to many of us, the inner “Call of the Horse” from the time we can remember, and an enchantment with their very nature, athleticism, and beauty, was likewise a lifelong passion for Mary Kay that led to many meaningful, treasured relationships and favorite places, a clear path to living a healthful, balanced life, and more recently, fulfilled a long-held heart’s desire. As a youngster, she was fortunate to spend summers working on a friend’s horse and dairy farm in the mountains of western Maryland. Their annual herds of 30+ horses and ponies carried large groups of vacationers along picturesque trails overlooking Deep Creek Lake. This talented family used teams of Belgians, Percherons, even Mammoth Mules for farm chores, harvesting hay/oats, and weekly hayrides. At the Horse Pulls during Fair Week, those proud Belgians consistently out-lasted the heavyweight teams! Every day, she and her friend’s guided trail rides up and down the scenic Appalachian hills while the horses diligently made their way. As was usually the case for all involved in the farm’s subsistence, the horse’s backs and feet were often tired and sore. In spite of giving them extra feed, hay, rest, and baths, Mary Kay longed to give those horses something more, something extra special in order to help them revive and recover…something…something, she says, “I just couldn’t put my finger on!!!” Later, while raising a family in the suburbs, Mary Kay found strength and fitness training to be the most efficient, effective way to regain the natural well-being and athleticism she had known from her years on the farm. She Certified under a former Olympic Bobsled and NFL Strength Coach as a Personal Trainer/Conditioning Specialist, with a focus on training new moms. The practice and study of anatomy, physiology, biomechanics, recovery, and nutrition were integral. With the help of another generous and competent mentor, she competed in and won her Middleweight class at the ’93 Northeast Natural Bodybuilding Competition when her second child was 18 months old. Moving to a small farm in the Shenandoah Valley of Virginia in 2000 enabled her to return to a rural lifestyle, share it with family and friends, and happily focus on personal training several Quarter Horses! This new perspective included the Classic philosophies of such modern Masters as Tom Dorrance, Mark Rashid, Karen Rolf, and Manolo Mendez, and Certifications in Rider Biomechanics and Equissage Equine Sports Massage. When Mary Kay discovered the Masterson Method and observed the remarkable changes and improvements in her horses’ movement, range of motion, performance, recovery, and well-being, she immediately undertook the Advanced Fieldwork Certification Course. Amazingly, the once elusive, “Missing Piece” she had longed to provide those hard-working horses of her youth, “literally and figuratively,” she says, “fell into my hands!!!”Completing the Masterson Case Studies opened another door into the diverse, thriving world of horses in Therapeutic settings. Volunteer work on, with, and for the horses in numerous community programs offered at Loudoun Therapeutic Riding was enriching and inspiring. As one of the oldest and largest facilities in Virginia, Mary Kay describes LTR as “a prime example of another dedicated group of talented professionals fully committed to meeting the needs of their community, and serving the greater good.” To that end, she participated in the first Masterson Method Pilot Course developed and given by senior Masterson Method Instructors in 2015 who explored and refined a future, additional Certification of Masterson Method Equine Specialist (MMES), specifically designed for use in Therapeutic settings, and emphasizing the importance and significance of ‘giving back’ to the horse. Upon the excellent advice of her First-Block Coach, Mary Kay participated in a Whole-Horse Dissection given by Equine Osteopath Dr. Anne-Marie Hancock, DVM and her well-known and respected colleague, Master Farrier Paige Poss. Their astounding, dignified expertise provided the large group (which included several other Veterinarians, Cranial-Sacral students, and an NYC Sculptor) an amazing and illuminating experience, and one that most certainly enhanced her understanding and practice of the Masterson Method. In addition, Mary Kay attended a Workshop developed by Natural Horsemen (and MMCPs!) Mark and Chrissy Rashid, designed especially for MMCPs and Students interested in bringing the many benefits of Aikido Martial Arts to the practice of Equine Bodywork and Horsemanship as well. The extent and value of their incredible ideas, exercises, and expertise could not be contained in just three marvelous days! Mary Kay wishes to express her appreciation and admiration to each and everyone in the Masterson Method organization for their outstanding professional Programs, Seminars, and Mentorships, and the dedication, inspiration, generosity, and integrity they instill in service to horses and the people who care for them.