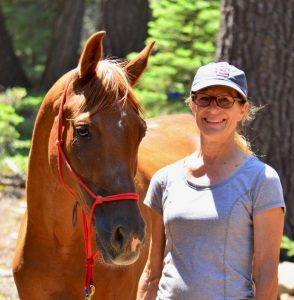 Mary Jane (MJ) resides in Cave Creek, Arizona on a five-acre horse ranch, living the dream she has had since childhood.  Most days are spent with and around horses, whether she is caring for or riding her own horses, teaching beginning riding lessons, helping others with their horses, or doing equine bodywork using the Masterson Method®. MJ was born with a love for horses and started riding lessons when she was eight or nine years old.  Through most of her youth in Michigan, she showed, trained, and took care of horses at a nearby stable.  She bought her first “very-own” horse after she was out of college and living in California.  MJ had grown up riding “big horses” suitable for jumping and dressage, but once she started working with a friend’s Arabian, she decided that was the breed for her.  In the late 80’s and early 90’s, she was living in Alberta and fell in love with cross country trail-riding and got a brief introduction to the sport of Endurance, a sport at which Arabians excel.  However, a busy career and raising three children delayed pursuing that interest until much later.

In 2012, after an almost twenty-year hiatus from horse ownership, MJ purchased two Arabians and decided to finally pursue her interest in Endurance.  With the pursuit of that interest came an appreciation of the importance of bodywork for hard working performance horses.  A friend introduced her to the Masterson Method® and MJ purchased the book and DVD and began practicing the bladder meridian and a few of the other techniques on her own horses.  In 2020, MJ had the opportunity to have Jim Masterson work on one of her endurance horses and was so impressed that she immediately signed up for the week-end course.  During the week-end course, MJ saw the phenomenal impact the Masterson Method® had on horses that were used by guests at a guest ranch.  She decided not only to continue her education to be able to enhance her own horses’ performance, but to start a new career in horse bodywork so she could impact the lives of other horses in the positive way she had witnessed.