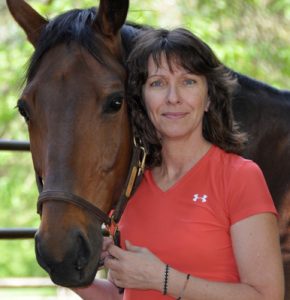 Marie Riley has been a Certified Equine Sports Massage Therapist since 2006 and a Masterson Method Certified Practitioner and Instructor since 2010.
Since training in The Masterson Method® she has worked on horses that compete on the FEI level in Show Jumping and Endurance, a 2011 FEI North American Young Rider/Junior Championship Dressage Silver and Bronze Medalist, Barrel Futurity Championship competitors, and horses in training with author of the book 101 Dressage Exercises for Horse and Rider, Jec Ballou.

I became a Masterson Method® Certified Practitioner in January 2010, and an MM™ instructor in May 2011 … and haven’t looked back! My journey continues to be an amazing adventure passionately dedicated to the art and education of understanding the horse. I have had the privilege to study, learn and work with an inspiring and supportive community of equine professionals, and I’m happy to report that the adventure continues!

When I first entered the equine bodywork arena in 2006, equine massage was just about the only modality available to the average horse owner. Since time, funds, skill and understanding were limited I forged ahead and became a Certified Equine Massage Therapist. At the end of a ‘grueling’ week I began to realize just how much more I needed to know.

In January 2014 I left my part-time job and officially became a full-time equine bodyworker as an Associate to Bill Stanton. He’s the guy that runs up and down the East Coast chasing the hunter-jumper A-circuit horses. And he’s so busy he employee’s three additional bodyworkers during the 3-month, Wellington, Florida circuit. The remainder of the year involves traveling to shows where clients are competing, typically between Lake Placid, NY and Tryon, NC. Occasionally, Canada and Europe are thrown in for good measure.