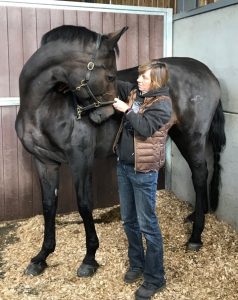 Lorraine has always been horse-mad, but only started riding lessons from about 11years old. From then on, she spent every weekend helping at the stables in exchange for riding lessons. Lorraine graduated with a BSc Hons in Applied Biology and carried on riding whilst she was at university, competing in the teams. She then worked in London and had to give up horses for a while, whilst undertaking an MSc in Haematology. After a few years of working in London, Lorraine was lucky enough to move down to the New Forest and become surrounded by ponies! That kick-started the horse obsession and she finally bought her own horse. Things developed from there and she passed on her love of horses to her children. The family now own four horses and ponies which keeps everyone busy. It was only when Lorraine bought a very tricky mare who had gastric ulcers, that she discovered the Masterson Method. The mare was in a lot of pain and hated being touched, so Lorraine stumbled across Jim’s YouTube videos when trying to find something to help her. The yawns from just the bladder meridian were amazing, and things just went on from there to now becoming an MMCP. Lorraine has had to do a lot of personal research into equine nutrition, to help her mare with ulcers, so she can help with any queries with that. Her New Forest pony has recently been diagnosed with PSSM1 which has also thrown up new feeding challenges. She can help you with her experiences of this too, as it can only be kept under control with management techniques, and of course some Masterson work. Lorraine is interested in natural horsemanship methods and loves the way that the Masterson Method ties in with this, as you have to listen to the horse. She has been at and also participated in, several Mark Rashid clinics that compliment the Masterson Method. She is also qualified in Kinesiology taping and is currently training in acupressure and red light therapy. She is willing to travel in her local area which includes Hampshire and Dorset, but please feel free to contact her.