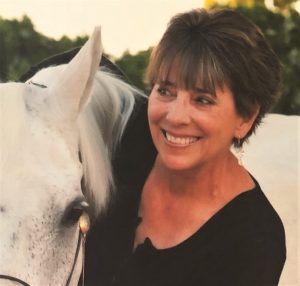 Lisa has had a love of horses since she was a little girl growing up in Washington State. Her father worked for the Fish and Wildlife Department which had a string of pack horses and mules. Being unable to ride the horses as much as she desired her father brought home an old broken down saddle and tied it onto a branch of their backyard apricot tree so Lisa and her younger sister could ride every day. Many rides later Lisa’s dream comes true and she gets her first “real” horse at the age of 12. Her father knew this day was coming!

She joined 4H and was blessed to have many wonderful teachers and mentors along the way. As she made her way to college to earn her degree in Parks and Recreation Management, she took her best friend and horse with her. College summers were spent facilitating a summer horse camp for CYO, Catholic Youth Organization, and assisting with occasional pack trips up in the back country of the Northern Cascades. She has ridden and competed in many of the Western and English disciplines including dressage, western dressage, reining, pleasure and equitation. Lisa also became a Flight Attendant for a major airline in 1990 and now lives in the Eastern Sierra’s. When she’s not out flying you can find her on the back of a horse, enjoying the great outdoors, as her trainer once said “She’s out finding her soul”

In 2011 Lisa’s dressage horse was diagnosed with COPD. In addition to veterinary care, Lisa began to look into alternative ways to help heal him and to bring him relief. She and her husband took Reiki classes, and this led to her learning about The Masterson Method®. She found that The Masterson Method® was a modality that really worked well with the horses, and this was a great addition to her Reiki work. Lisa is now a Reiki Master.

The Masterson Method® uses a light touch promoting relaxation that helps release tension and improves performance. Lisa has seen great results on the many horses she has worked on using The Masterson Method®. Lisa enjoys working on a variety of horses and feels that every horse is special and has something to offer. Having received so many gifts of love from the horses in her life she now wants to give back and offer help and healing in the best way possible. The Masterson Method® is enabling her to do just that, and she is very grateful to now be a Certified Masterson Method Practitioner!