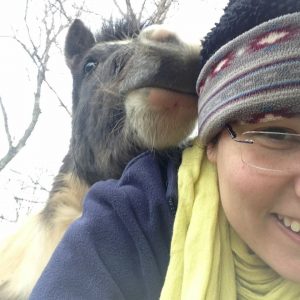 Lara made the decision, aged 8, to discontinue ballet lessons in favour of horse riding. Dancing was fun, but horse time of any kind was far more precious; she wanted to be around horses and for horses to want to be around her. A decade of Saturday afternoons were passed at a riding school in Dorney, where the focus for Lara was on connection, rather than competition. She began practicing Reiki aged 15 and would use this on any animals that seemed to appreciate it.

Aged 19, a break from regular horse-time was necessary whilst living in London to complete her dissertation on the subject of non-verbal communication, and graduate with a BSc (Hons) in Psychology and Counselling in 2005. Lacking the life experience to become a counselling therapist at 21 she initially pursued a non-equestrian career in an unrelated field.

Lara was in due course able to enjoy a rewarding connection with a little cob named Shadow who renewed her passion for riding. Time spent close to horses seemed to reverse the negative effects of a stressful office job, and an appreciation for the value of massage and relaxation in general on her own body developed and increased as years passed.

In 2015, after witnessing the effects of a Masterson Method session, and the desire horses had to participate in the session, she began reading Jim Masterson’s book Beyond Horse Massage and practicing elements of the approach.