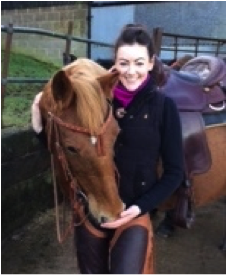 Biomechanics has always been an interest of Hannah’s, she began training in western riding and horsemanship which lead her to the theory of bodywork. Hannah’s equine therapy began in 2013 when she became a Reiki Level 1 practitioner, she progressed to Level 2 in 2014 and attended her first Masterson Method seminar shortly after. Hannah believes healing both inside and out are as equally important, to achieve a true state of equilibrium.

Hannah has a soft approach and is guided by her intuition. She has a whole horse philosophy, considering the many factors which could be affecting your horse physically, emotionally and mentally. She uses both modalities alone and together, depending on the healing needed at the time.