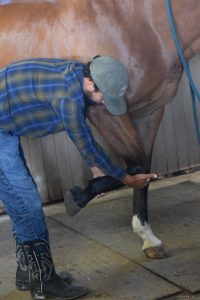 Dwayne lived in Southern California about 18 years, and has been certified Equine Sports Massage Therapist by Equissage. Working with horses all around Greater Los Angeles since 2012 and was attending Los Angeles Pierce College Equine Science and studied about 2 years. Finished The Masterson Method, Weekend Seminar, in Bakersfield in 2016, then moved to North Texas late summer of 2016. Finished the MM Advanced 5-Day Course with Jim Masterson, and been working with Dressage, Cutting, Barrel Racing, Hunter/Jumper, Cowboy Mounted Shooting, and Trail Riding Horses as I was going through my Fieldwork case studies. I became certified by Jim Masterson in Watsonville, CA in August 28, 2017. Like to Ride all Around Western and have completed in Cowboy Mounted shooting events. Located near Weatherford, TX. Serving horse owners and trainers all around North, North Central, and East Texas.