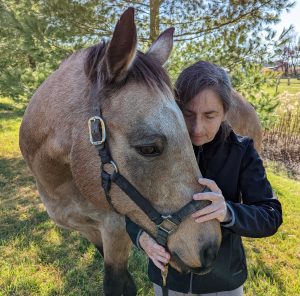 My affinity for all creatures great and small—and for horses in particular—dates back to my childhood, when I rode whenever I got the chance. I have been a student of dressage since 1996. Around that time, I also began to study Ortho-Bionomy, a form of bodywork that uses light touch and gentle positioning to cue the body’s self-correcting reflexes, and Reiki. After I moved to Wisconsin in 2012, I began to learn and practice natural horsemanship. My horse, Cougar, led me to the Masterson Method® in 2017, and after becoming an MMCP in 2021, the Masterson Method® led me to a second career. The soft listening, careful observation, and partnership fostered by both natural horsemanship and the Masterson Method® resonates profoundly with me (and with the horses with whom I’ve worked!). The healing that results from simple touch continues to amaze.