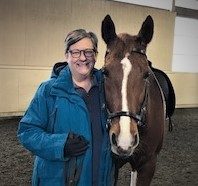 Jane arrived somewhat late to the horse world.  As a little girl, she would see horses only occasionally – in the field or at the rare horse show or rodeo – but knew she wanted and needed to be around this beautiful being eventually.  She took a riding course in college and it was her first experience up close and personal to horses.  In her 20’s and 30’s she managed to take once-a-week lessons, but she actually marks the start of her horse career with the purchase of her first horse, a thoroughbred she called Windy.  Through time spent in the saddle, lessons, injuries, equine illnesses and lameness, diets and supplements, tack changes, showing – that long list of things that horse owners tread through – Jane decided that she wanted to give back to the horses she came to know.

Jane took an equine massage course but believed that there could be a deeper therapeutic connection to horses she worked with so, she began her search for more instruction and direction.  After some on-line searching, she found a Masterson Method® video on YouTube.  She was intrigued by the light touch used and tried out the Bladder Meridian and some other techniques on a few of horses.  From there she bought the book Beyond Horse Massage, then attended a weekend seminar, and eventually completed the certification.  The Masterson Method® filled that deeper connection by introducing her to observing the horse in a way she had not done previously and to responding in light, soft ways that reached the horse on a deep level.  Jane finds the connections made through Masterson Method® bodywork are a benefit to herself as well as the horses – she feels there’s no better way to spend time and feel good energy. It’s a very happy win!