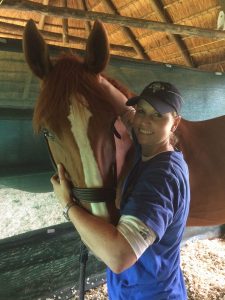 Chantal is a qualified Physiotherapist currently residing in Johannesburg South Africa. She spent a few years traveling around studying in various places to further her qualification, including a stint at Curtin University in Perth, Australia, before finally finding her niche in animal therapy.

She first became involved with animal bodywork in 2006 and studied advanced Canine Physiotherapy in 2007. By then she was already experimenting with the bodywork on horses and did an apprenticeship in Equine Physiotherapy with another physiotherapist in South Africa.

Her first introduction to The Masterson Method was in 2009 when she was searching the website for methods of improving and developing her work with horses. Her next step was getting the DVD, and after studying the recording, she booked her trip to Palo Alto in 2010 to complete the advanced course held at the Red Barn at Stanford University.

She was still slightly skeptical about the use of light touch, which is considerably different to some of the methods used in traditional physiotherapy, but following the huge jump in success she achieved with her sport horses back home by incorporating the MM techniques, she was soon using The Masterson Method as the predominant method in her work, and not just as an additional set of tools. Her equine practice grew rapidly and she was soon traveling all over the country, working at the top Showjumping events on the calendar.

Her equine practice has continued to grow from strength to strength with each year until Chantal was able to close her human practice in 2013 and now focuses solely on her passion, which is assisting top-level sport horses to work, perform and achieve to their highest potential.