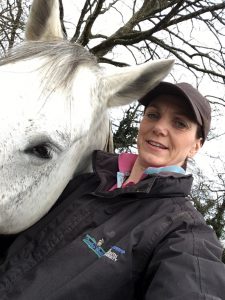 Lucinda's career with horses began at 16 years of age, with an Apprenticeship at a local Equestrian Centre where she stayed for a further three years gaining my BHS qualifications and a wealth of teaching experience. From that point, Lucinda worked within the Equine industry for a further six years mainly with Mounted Games Ponies, Hunters and Eventers. This is here Lucinda first witnessed Equine Bodywork and was immediately drawn to it. As much as Lucinda wanted to pursue this role, it did not seem financially viable and fell into the trap of office work! Continuing to ride and visit local shows and events, however the self-perpetuating nonsense of office life began to wear Lucinda down. This continued until Lucinda moved with her husband and two children to Cornwall for a better quality of life. It was at this point that Lucinda's career turned full circle and she signed up for a Foundation Degree in Equitation Science at Duchy College, covering Equine Training, Behaviour and Welfare. Lucinda's interest in helping horses through bodywork still remained and during work experience at college she met Leigh Jackson (a Masterson Method Coach) who took Lucinda under her wing. Lucinda continued with her Degree; graduating in November 2017 and went on to become a Certified Masterson Method Practitioner in May 2018.

Lucinda believes that the learning outcomes and experiences from the Foundation Degree and The Masterson Method Certification have reinforced the importance of looking at the horse holistically; and respecting each horse as an individual. It is not about working on a restricted area of the body, it's about understanding how the horse uses its whole body, how it balances itself, if it compensates for areas of tension, it's job, it's age and how capable the horse is to carry out their job in terms of confirmation and personality. Lucinda enjoys keeping up to date with the Equine Industry and will continue to develop her understanding of everything Equine.