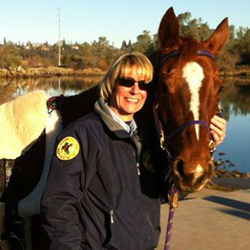 Angie has loved horses since she was a young child. She started taking riding lessons at the age of seven but marriage and kids put her love of horses on hold. In January 2008, Angie's friend, Laura, invited her to an equine rescue, where she ended up volunteering 40 hours a week. She enjoyed assisting the equine vet with surgeries, meds, vaccinations, emergencies, etc. Angie helped with the therapeutic rides for Autistic children too. She was amazed to hear the parents sharing stories about their children who went from never talking in their lives to communicating with their parents. The parents finally had "Hope". What a blessing that was to see. Angie's love of horses prompted her to look at buying a 9-year-old Quarter Horse named Phoebee from the rescue. The vet told Angie, "I would never tell anyone to buy this horse." Phoebee had ringbone in her right hind, she was lame and she was supposed to go to slaughter. But Angie knew she was meant to be in her life. Angie and Phoebee have been on the Folsom Lake Mounted Patrol since 2009. They were also involved with S.O.S. (Sweep Riders of the Sierra's). For many years, they would sweep the last leg of Tevis and Western States, 100-mile races from Squaw Valley to Auburn, CA. Phoebee has been such a blessing to so many people. However, Phoebee has had many ups and downs throughout the years. At one point she was in so much pain, Angie wondered if there was "Hope" for her sweet mare. She found an amazing bodyworker who was able to work with Phoebee. Angie is convinced that the bodywork saved Phoebee's life. Angie started working on her own horses with The Masterson Method techniques. Once she saw the huge changes The Masterson Method made with her horses, and when all the horses started lining up to be worked on, she knew she was on to something special. Angie had to become a Masterson Method Certified Practitioner. The love and compassion Angie has for horses goes beyond words. Angie's primary goal is to make a difference with every horse she touches. She wants to give their owners a "Touch of Hope" that we will be able to enhance the performance of their horses.