Educational Friday 7) The Horse’s Diagonal and Where to Start 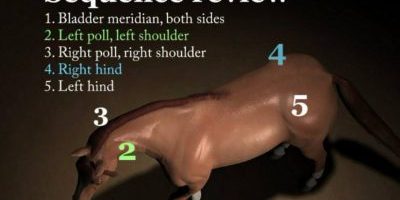 7) The Horse’s Diagonal and Where to Start

So where do we start? Horses are like humans in the sense that they are not symmetrical. Just as humans have a predominant side – most are right-handed and a few are left – horses are born into a similar situation, except that they have an extra set of limbs back there. In my experience nine out of ten horses are what I call right front – left hind diagonal horses; they have more pain/tension in the right poll and atlas, and more pain or tension in the left hind in the gluteal and sacrum. This is because they naturally work or load the right front and left hind more than the opposite. So, in addition to other factors which might contribute to soreness or tension in the body, horses start out set up to develop unilateral tension in the body, and nine out of ten (at least) are on that right front, left hind diagonal. (FYI – another sign that you may have a RF-LH horse is that these horses often bend easier to the left, and are more comfortable on the left caner lead.)

Now to get back to where we start (again!), nine out of ten times we start on the left front. If we find (the horse tells us) that it’s extremely uncomfortable on the left, then we’ll move to the right and start there. In fact, the horse may have already given us an indication of where to start while we were doing the Bladder Meridian.

Next week we’re going to begin the work of releasing tension in the poll-atlas and neck by asking for movement in these vertebrae with the Lateral Cervical Flexion. And most likely starting on the left. See you next week.